For predictable and functional esthetic results in restorations, in addition to dental technology experience, we need a denture tooth designed on the basis of the esthetic and functional standards set by nature. VITAPAN EXCELL (VITA Zahnfabrik, Bad Säckingen, Germany) is an example of this kind of anterior tooth, which is characterized by vibrant shapes with “golden proportions.” Tooth axes, the length/width ratio and angle characteristics are consistently patterned after nature. In addition, its special layered structure enables a natural play of shade. In the following case report, Darius Northey, Dental Technician (Buderim, Australia) shows how he was able to successfully use the new denture tooth for an implant-supported restoration.

A 78-year-old female patient was dissatisfied with the positional stability of her mandibular prosthesis. The acrylic teeth appeared abraded, stained and very dull. After the consultation, the patient decided on two implants in the mandibular in order to achieve greater functional stability, and was referred to an oral surgeon. After a healing period of three months, the implants were osseointegrated in the incisal region of the mandibular. First, the patient did not want a new total prosthesis in the maxilla, although the midline was shifted extremely to the right and functional disadvantages due to the well-worn and irregular occlusion were to be expected. She feared that her usual appearance would be altered by a new restoration. However, following a comprehensive consultation, she finally opted for a new restoration.

The restoration in the mandible began with an anatomical alginate impression. So that it could be oriented to the old maxillary prosthesis using the copy denture technique, this was duplicated with putty and reproduced with a cold polymer for denture bases. For the mandible, a custom-made impression tray was made, a mucodynamic impression was taken in several steps and the impression cap was affixed. Using the model, a simple bar construction was fabricated and affixed with synthetic material to the attachments. A wax rim was created over the bar in the mandible, and plates for the imaging of the gothic arch positioned on this and the maxillary duplicate. Laterotrusion, protrusion and centric were recorded and affixed. The duplicate was successively reduced in the setup area in order to first position and try in the VITAPAN EXCELL anterior tooth and then the VITAPAN LINGOFORM posterior tooth.

After a complete functional and esthetic try-in, a mucodynamic impression with wax setup on a duplicate base was taken in the maxilla. The bite was registered with silicon. In the maxilla, a final master model was produced and articulated according to the vertical dimension. The maxilla and mandibular setups were embedded in cuvettes, boiled out and pressed with heat-curing polymer into different gingival shades. After polymerization, both works were rearticulated and an occlusion check was done. The prostheses were processed with fine-cut carbide milling tools and rubber polishers. The final polishing was done with pumice and polishing paste, as well as a buffing wheel. The patient was very satisfied with the functional and esthetic result. Thanks to the lifelike shapes with “golden proportions,” the three-dimensional anatomically layered construction and the multifaceted surface texture, the prosthetic restoration with VITAPAN EXCELL appears very natural. 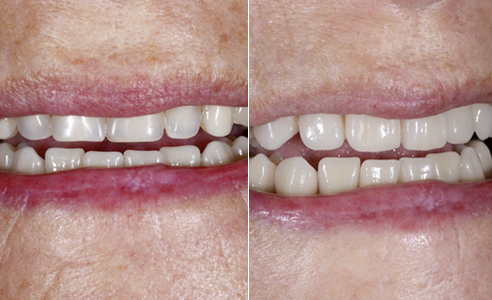 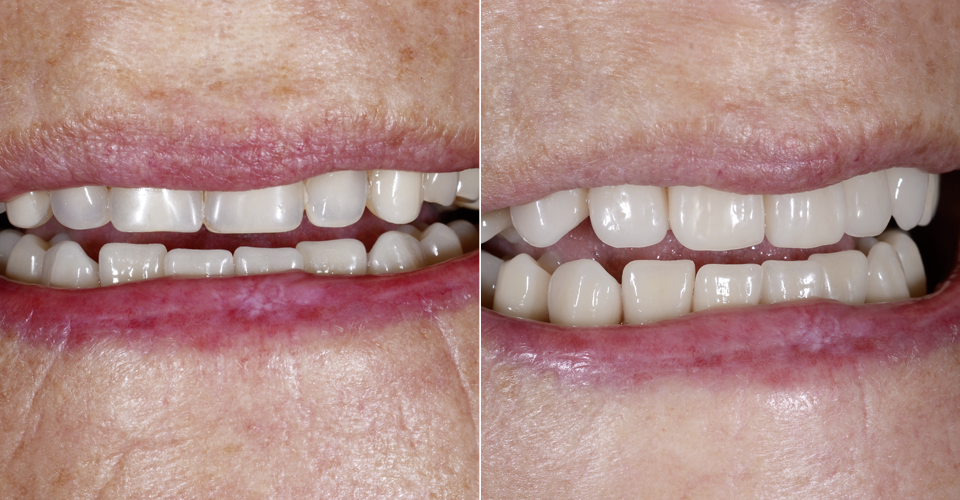 INITIAL SITUATION: The insufficient restorations showed a midline displacement and functional disharmonies.
RESULT: The patient was very happy with the naturalness of the new restoration. 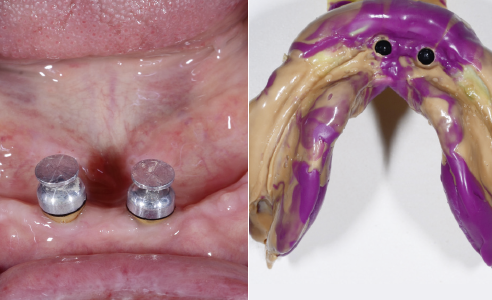 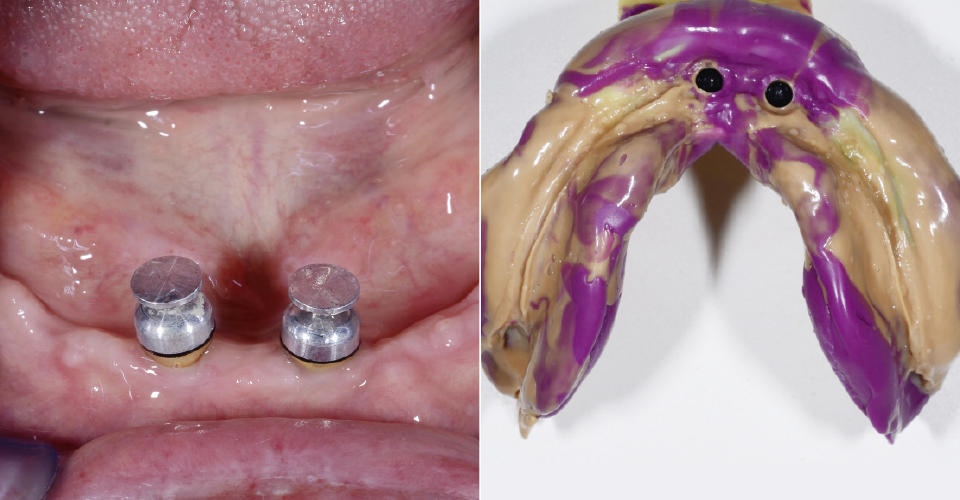 Fig. 2: Two implants were inserted in the incisal region to functionally stabilize the restoration in the mandibular.
Fig. 3: A custom-made tray was used in the mandibular for a mucodynamic fixation impression. 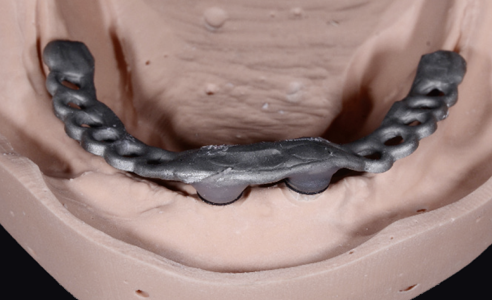 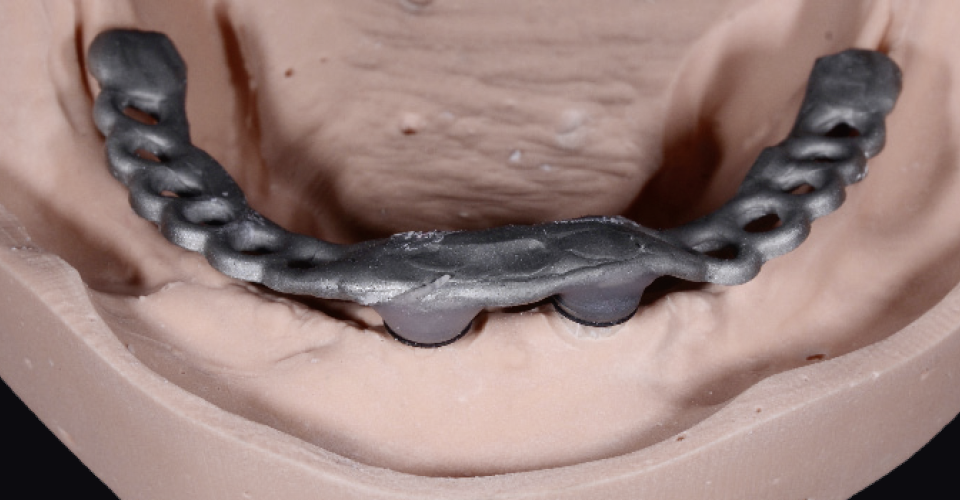 Fig. 4: A simple bar construction was poured and fixed with synthetic material to the abutments. 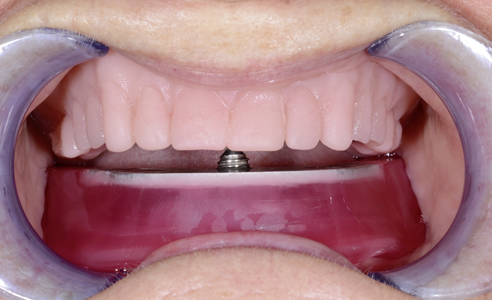 Fig. 5: The centric and temporomandibular movements were recorded with the gothic arch. 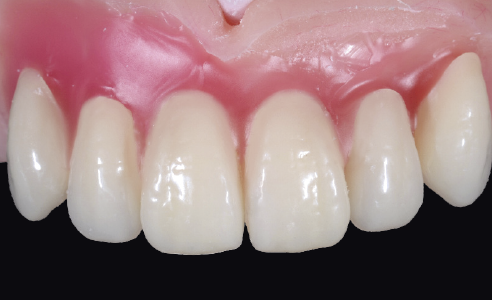 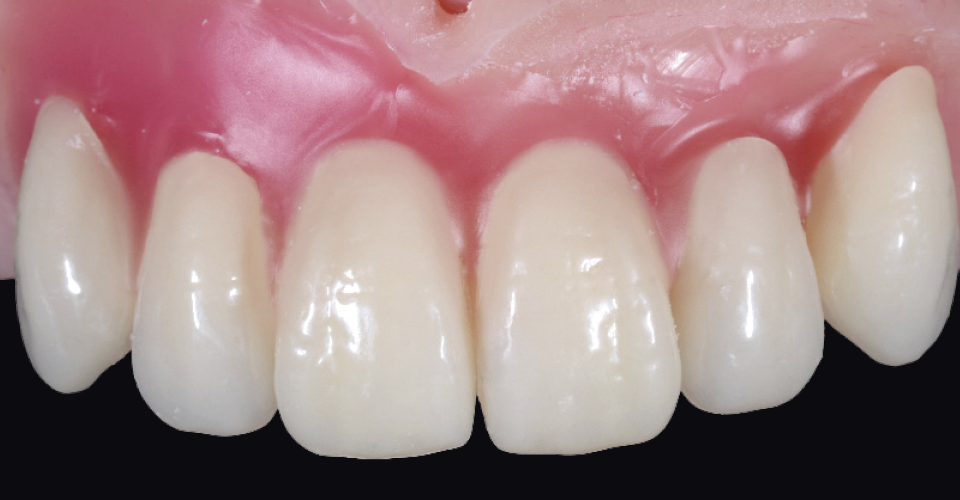 Fig. 6: First, the esthetic zone of the maxillary duplicate was reduced, then replaced with VITAPAN EXCELL, and finally tried in. 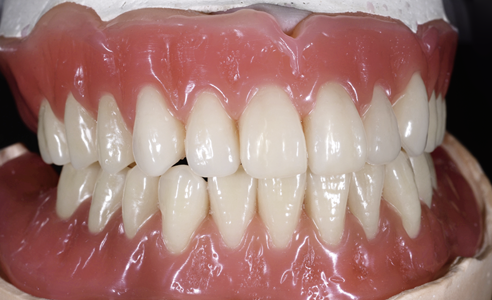 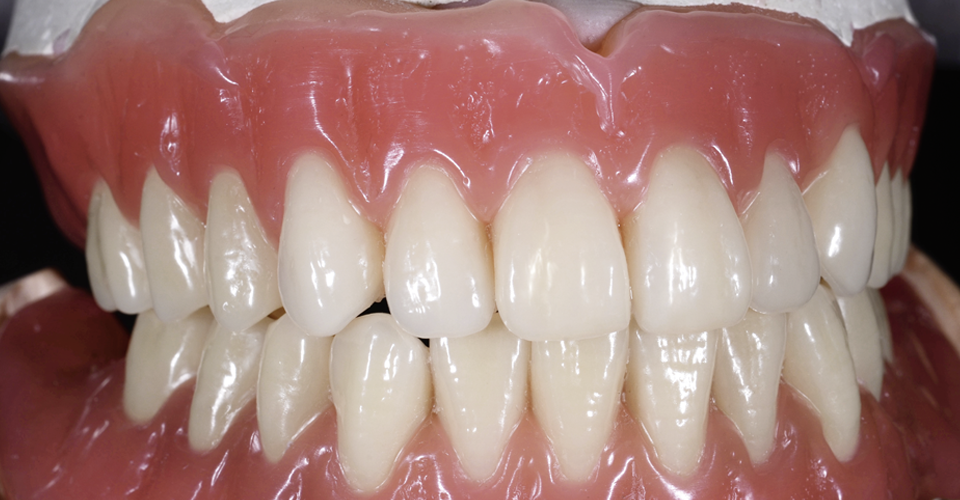 Fig. 7: The final wax setup in the articulator with molded gingival anatomy before the try-in. 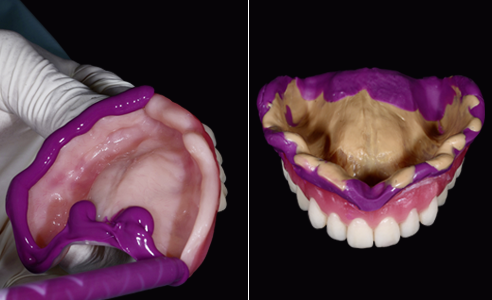 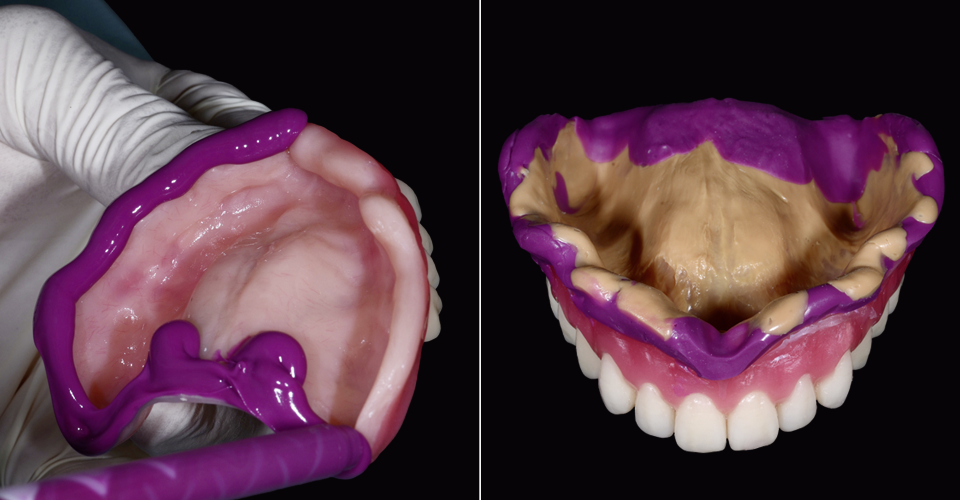 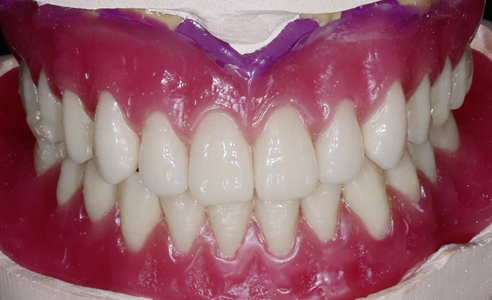 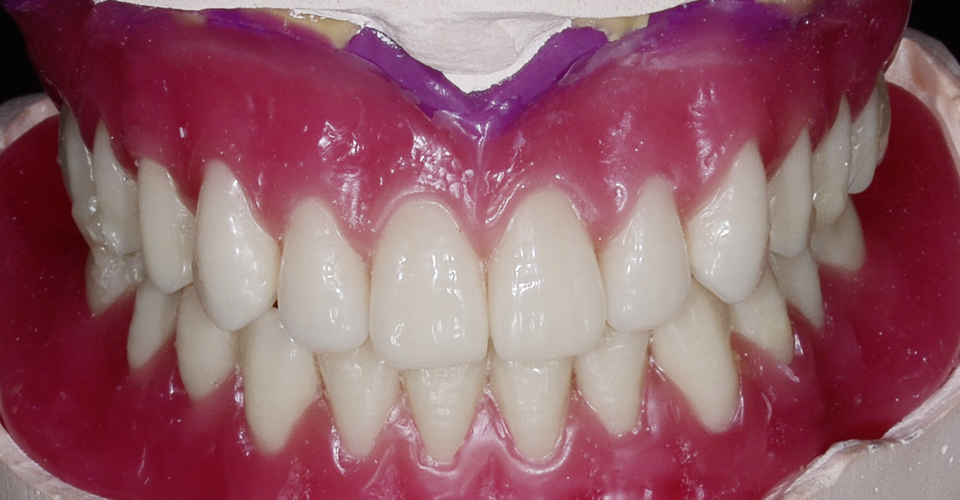 Fig. 10: Based on the bite registration of the setups, the maxilla could be accurately rearticulated. 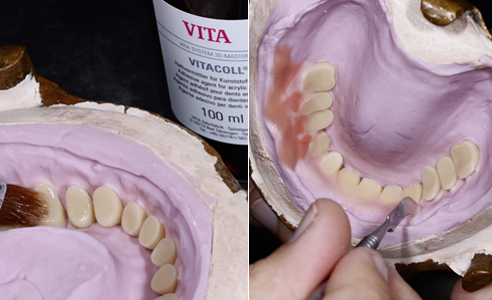 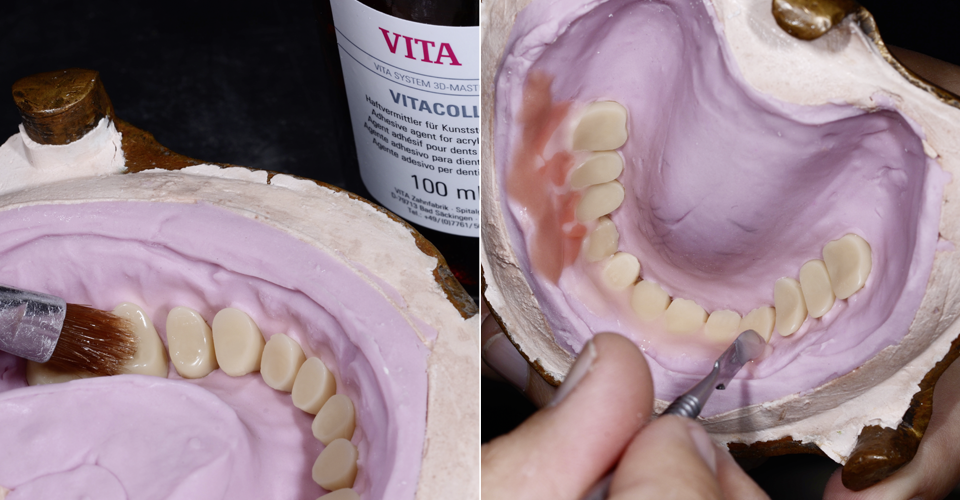 Fig. 11: VITAPAN EXCELL and LINGOFORM were conditioned with VITACOLL to ensure good adhesion to the base.
Fig. 12: The vestibular plate was customized with several synthetic material layers in different gingival shades. 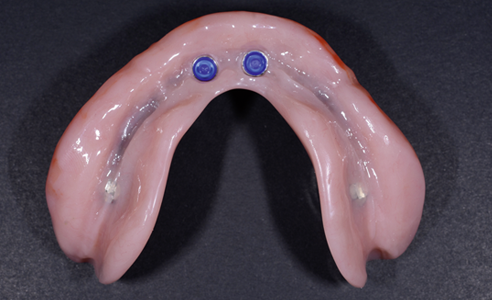 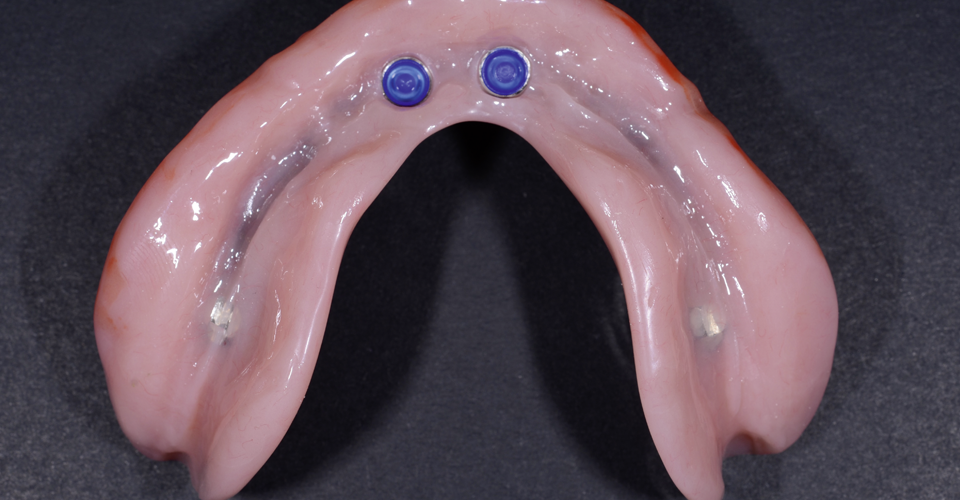 Fig. 13: The bridge and attachments were integrated by polymerization of the synthetic material base. 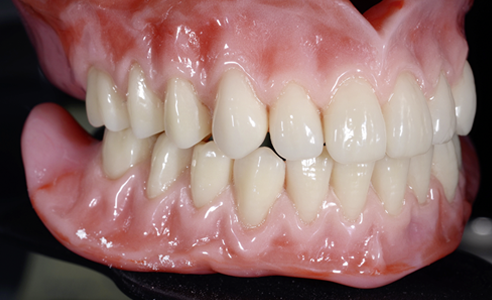 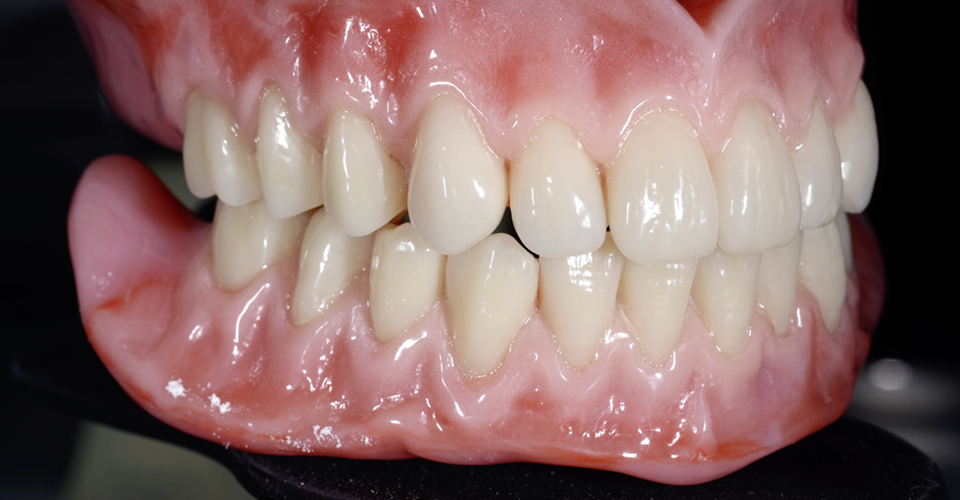 Fig. 14: The finished restorations after elaboration and polishing in static occlusion. 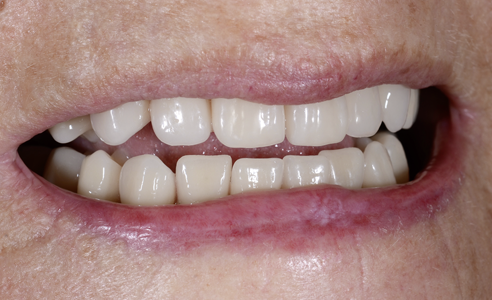 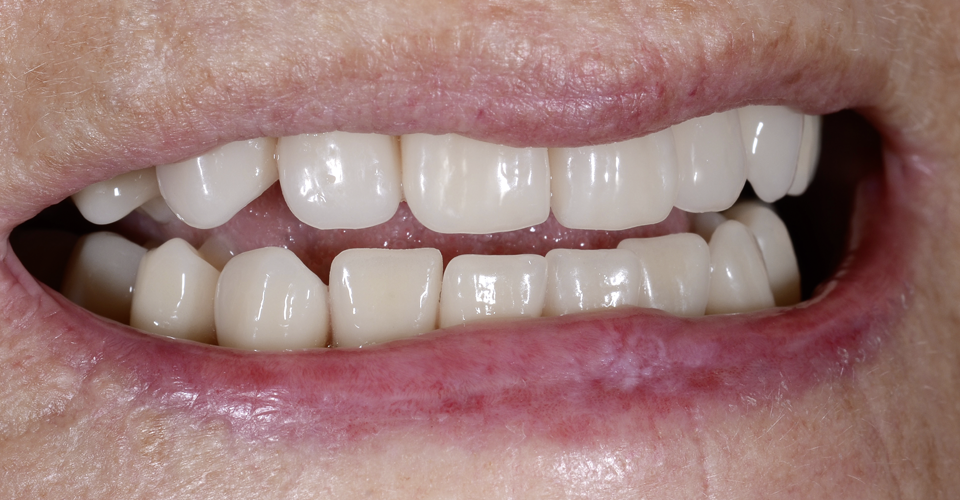 RESULT: The patient was very happy with the naturalness of the new restoration.