In the case of reconstructions that have an intermediate shade in whole or in part, near-natural reproduction of the tooth shade is typically demanding. The chroma of the restoration must be adjusted selectively or completely to consistently match the tooth shade. With the new VITA AKZENT Plus CHROMA STAINS (VITA Zahnfabrik, Bad Säckingen, Germany), the shade saturation of ceramic restorations can be controlled in a targeted manner. Dental Technician Renato Carretti (Zurich, Switzerland) uses an anterior crown to show how the shade effect can be systematically influenced with the new stains.

Tooth 12 of a retired woman had been repeatedly restored with composite. Due to the size of the defect, chipping and fractures of the direct restoration occurred again and again. After careful consideration, the patient decided to have the tooth fully crowned. This was no easy task. Due to the aging process, the neighboring natural teeth in the esthetic zone showed an individual play of shade and light that had to be reproduced ceramically. For the demanding single-tooth reconstruction, it was to be anatomically reduced from the vestibular side, and multichromatic zirconia and the multifaceted veneering ceramics VITA VM 9 were to be used. In the first session, the tooth was prepared, scanned and provisionally restored. The determined basic tooth shade was between A2 and A3.

The crown framework made of zirconia was designed, milled and sintered in the CAD/CAM workflow. The vestibular reduction was cervically layered with VITA VM 9 BASE DENTINE A3, and the body area was layered with A2. Due to the high translucency of the natural residual dentition, NEUTRAL and a very thin layer of WINDOW were used on the incisal edge. For a translucent depth effect, the flanks were accentuated with bluish translucent EFFECT ENAMEL 9. This was followed by the first dentin firing. The restoration was still too bright on tryin. The cervical area was then characterized with a three-to-one mixture of BASE DENTINE A3 and EFFECT CHROMA 3 (light yellow). A translucent effect on both flanks was achieved with EFFECT STAINS 11 (blue).

3. Play of shade with VITA AKZENT Plus

In order to replicate the multifaceted shade nuances in the incisal edge and in the body area of the crown, VITA AKZENT Plus CHROMA STAINS was used on a selective basis. "The CHROMA STAINS are very intense and also visible in a thin layer. This is fantastic, especially with monolithic restorations," says Carretti, describing the benefits of the stains, which allow a targeted control of chroma staining. The mesial and distal incisal area, as well as the body area, were characterized with CHROMA STAINS A, and the middle incisal area with the more intense B. After visual intraoral comparison in the patient, all characterizations were fixed with a stain firing.

After a follow up clinical try-in, all participants were satisfied with the result. After the completion of the crown with fine diamond and sandpaper, the glaze firing could be carried out. For a natural effect, the gloss was finally reduced with a polishing brush and pumice, without reducing the shade effect. The controllable chroma of the VITA AKZENT Plus CHROMA STAINS enabled a play of shades that matched the natural residual dentition. The restoration met the high expectations of the patient. 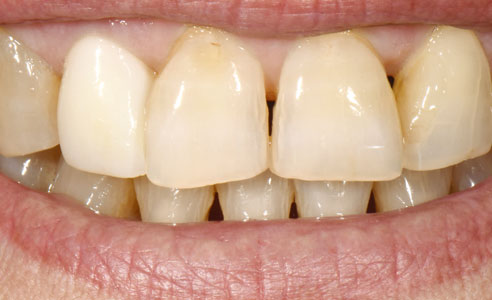 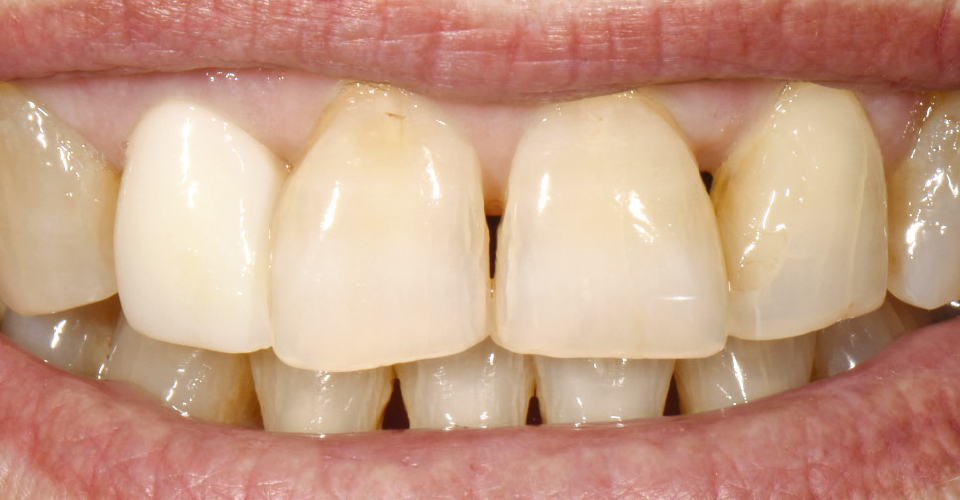 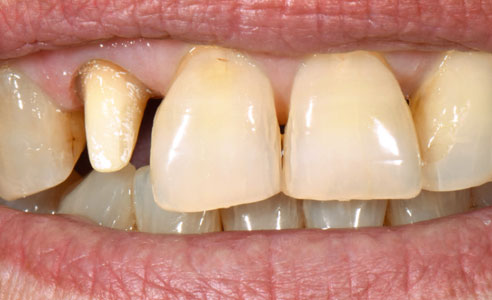 Fig. 2: For the raw and stain try-ins, the temporary was removed. 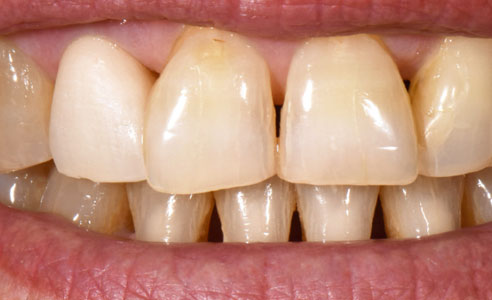 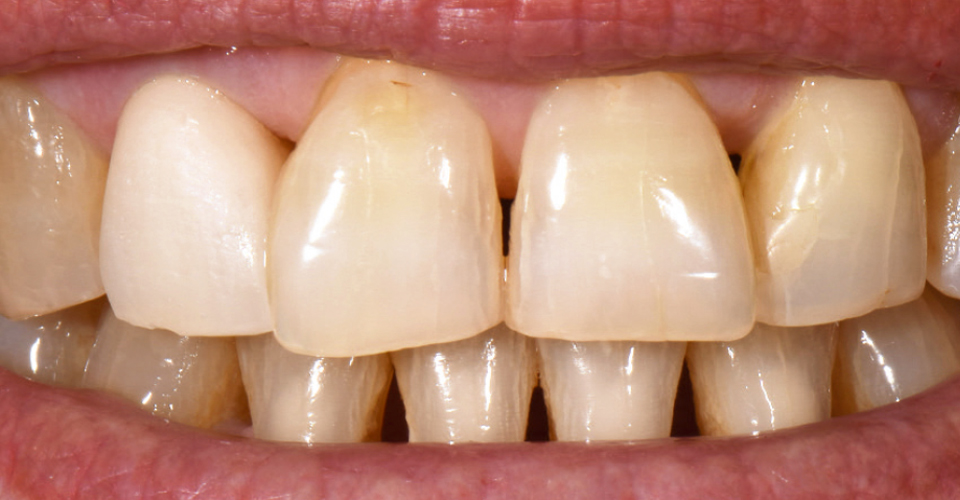 Fig. 3: The raw firing try-in after the first dentin firing still shows a crown that is much too bright. 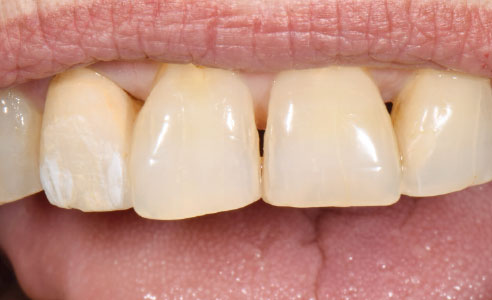 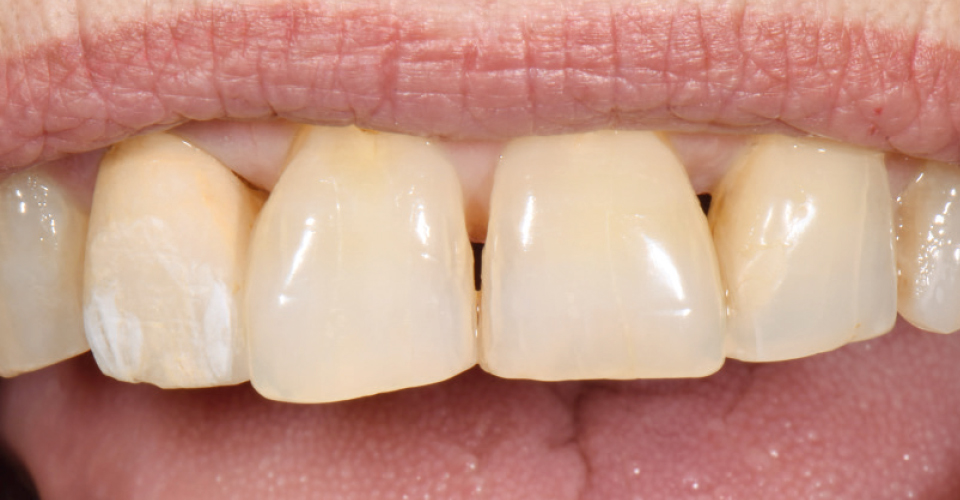 Fig. 4: The play of shade at the incisal edge and the body area was reproduced with VITA AKZENT Plus CHROMA STAINS A and B. 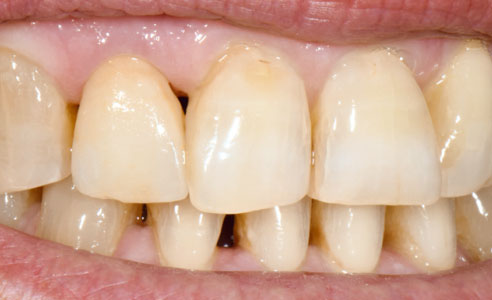 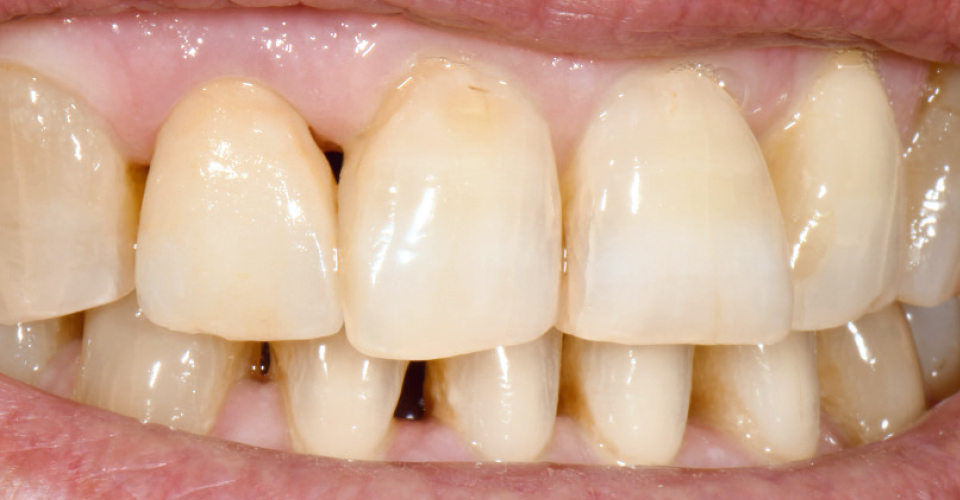 Fig. 5: After the stain firing, all participants were satisfied with the result. 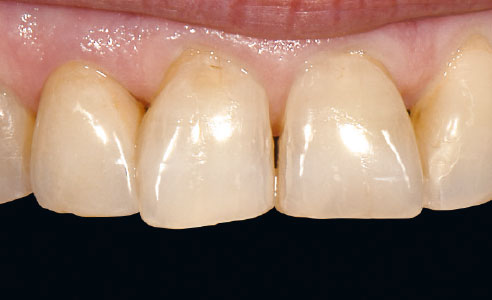 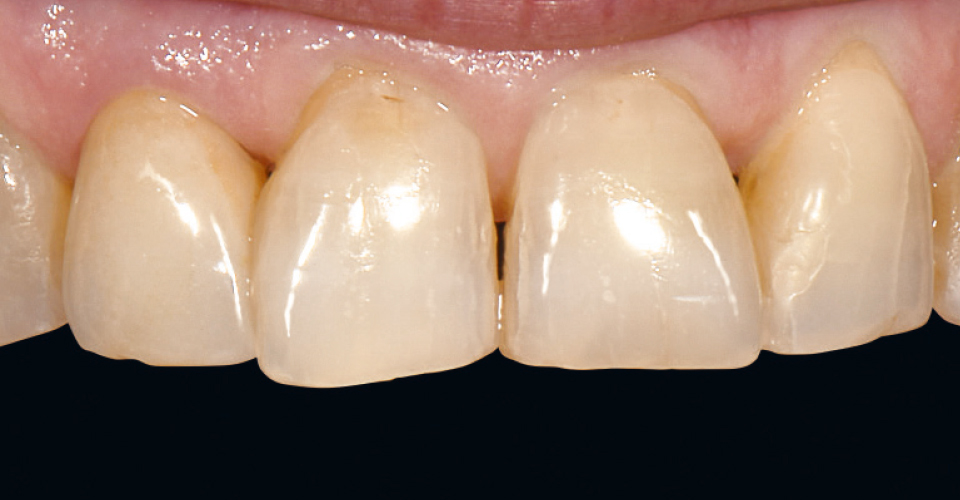 Fig. 6: Result: The crown was polished and finally integrated. The restoration harmonized with the remaining tooth substance.